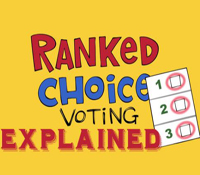 There are many methods of determining the will of an electorate, but the system in widespread use in this country (the “Plurality System”) is just about the worst. Though it has been shown mathematically that there is no perfect system (“Arrow’s Impossibility Theorem”), the family of Ranked-Choice Voting systems have many advantages. We will consider two of these: APS (“Average Placement Score”, based on the ideas of Jean Charles de Borda of France) and IRV (“Independent Runoff Voting”, first suggested by Thomas Hare of England). By comparing them thoroughly, we will see why APS is by far the superior method, though both are superior to Plurality.

This is a “virtual” lecture, mediated by Zoom. It’s 4-5 pm on Wednesday, 9 September. Interested persons should contact me <rick.luttmann@sonoma.edu>) or the SSU Math Dept (664-2368) shortly before the event for details on how to access the meeting.